Hello learners! In previous article, you have learnt about Prepositions and its types. In this article you will learn about Use of Prepositions.
Let’s do some revision.

Preposition is a word which used before a noun or pronoun and shows its relation with other noun or pronoun.
E.g.- To, in, on, among, onto, under, without etc.

In this article you will learn and understand how and where to use the following Prepositions in a correct way.

In
On
At
To
Into
Upon
Till
By
Since
From
For
In
Within
With
Between
Among
Under
Underneath
Beside
Besides
So, in this article you will be learning about use of the above prepositions in a right manner. But, before this you should know why ‘Use of Prepositions’ is necessary to know in English Language. 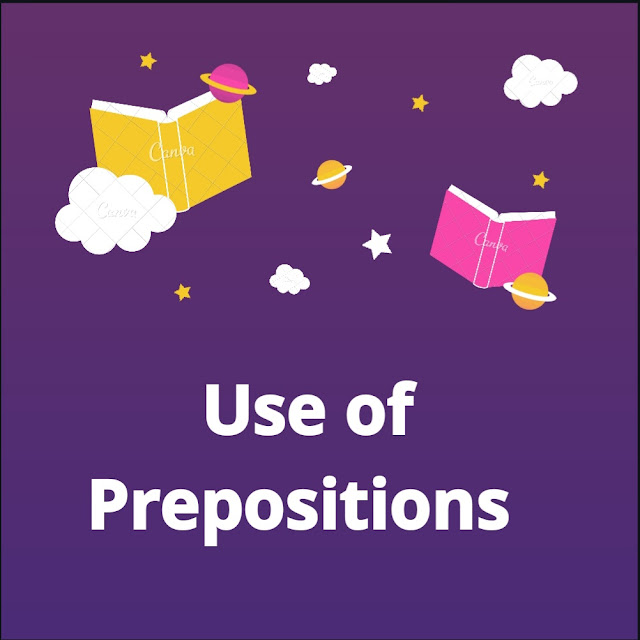 What is the use of ‘use of Prepositions’

Use of Prepositions is one of the important topics to know and learn about. Everyone knows about Prepositions but many of them do not know where and how to use these Prepositions. As grammar is useless without following it’s rules. Likewise, Prepositions are incorrect if one is not following this in a right way. So, use of prepositions is an essential topic of English language.

Here is an explanation of the above mentioned prepositions.

◇ Use of Prepositions ‘In/ On/ At with reference to a place.
○ In
Preposition ‘In’ is used with countries, states, districts, big towns or while referring a particular kind of place or house in a general way.
For example–
1- I live in India.
2- Nainital is in Uttarakhand.
3- Everyone has a dream to live in a big town.
○ On
Preposition ‘On’ is used to denote the surface of an object.
For example–
1- He sat on a desk.
2- The butterfly is taking rest on a leaf.
3- What are the letters on the blocks?
○ At
Preposition ‘At’ is used while referring to names of small towns or villages and it is also used before the names of particular houses.
For example–
1- I enjoyed my stay at Jaipur.
2- The President of India lives at Rashtrapati Bhawan.
3- Jessica is staying at Taj hotel.
◇ Use of Prepositions In/ On/ At with reference to time.
○ In
Preposition ‘In’ is used to specify a particular year, month or period of time in which something had happened.
For example-
1- She visited Maldives in 2018.
2- Christmas is celebrated in December.
3- I was born in April.
○ On
Preposition ‘On’ is used to denote particular day or date.
For example-
1- He enjoys holiday on Sunday.
2- Rakshabandhan will be celebrated on 3 August in 2020.
3- She left for Ukraine on 15th of December.
○At
Preposition ‘At’ is used to express a certain point of time.
For example-
1- The train leaves the station at 10 o’clock.
2- They called me at afternoon.
3- My mother adviced me not to use mobile phone at dinner time.
Preposition In/On/At are used in referring to things or rest.
For example-
1- The little baby was in bed.
2- Each student wants to be at the front page of school magazine.
3- The kettle is on the fire.

Preposition ‘To/ Into/ Upon‘ is used to referring things which are in motion.
For example-
1- Sheela goes to doctor’s dispensary.
2- He jumped into a wall.
3- The tiger sprang upon a villager.

These prepositions denote time.
○ ‘Till‘ means ‘up to’.
○ ‘By means ‘not later than’.
For example-
1- My sister sleeps till 7 o’clock.
2- I shall complete my work by next Saturday.
3- Ratan will be back from New Delhi by this Thursday.

These three prepositions are used to refer point of time and period of time.
○ Since
Preposition ‘Since’ is used to denote point of time (fixed time) in Perfect and Perfect Continuous Tense.
For example–
1- I have been waiting for you since 2019.
2- He has not received any information since a year.
3- They have been doing their work since Tuesday.
○ From
Preposition ‘From’ is used to denote time in all tenses.
For example-
1- She will begin her work from Monday.
2- Alka is playing badminton from a month.
3- Dev was working in a multinational company from the last November.
○ For
Preposition ‘For’ is used to denote period of time ( unfixed time) in perfect tense and continuous tense.
For example–
1- The farmer had been ploughing his field for 3 hours.
2- Riya has learnt her lessons for three days.
3- You have been painting a picture for a week.

When we use ‘In‘ before a Noun that denotes a period of time, it meant ‘at the end of‘. But, preposition ‘Wihin‘ we use when we mean ‘before the end of’.
For example–
1- The meeting will commence in 20 minutes.
2- She will come back within 3 hours.
3- The boys will over the match within 2 days.

Some words are followed by prepositions. These are as follows.

I hope this article ‘Use of Prepositions’ is helpful to you.

Preposition and its types || Types of all Preposition