Pronoun and its kinds:-

Let’s learn about pronoun and its kinds.

Pronoun is a word which used at the place of Noun.

In other words we can say, the word which replaces noun in a sentence is known as Pronoun.
Pronoun is second parts of speech in English Grammar.
Let’s give a look on the following example-
Rashi is 25 years old. Rashi works in a private sector. Rashi earns a good sum of money.
In the above example, you can notice repetition of same naming word i.e. Rashi again and again and I do not feel it is looking nice.
Now, second thing who is Rashi? Whether a masculine gender or feminine gender? Well, it sounds like a feminine gender.
Read this also : Noun-Gender in English
As you know well that for feminine gender we use ‘She’.
Now let’s understand definition of Pronouns with the help of above example.
As you can see in above example, three times naming word i.e. Rashi is used so instead of using Noun (Rashi) in all the three different sentences, you may use ‘she’ because ‘she‘ denotes Rashi only.
If you write above three sentences in this way then it will surely look nice.
‘ Rashi is 25 years old. She works in a private sector. She earns a good sum of money.
So, firstly you will introduce to whom you are talking about. Here, you are talking about Rishi so, in the first sentence you will mention name (Rashi) i.e a Noun but in rest two sentences, you will replace Noun (Rashi) with Pronoun (She) as Rashi is a feminine gender.
Point to Remember– You can replace repetition of Nouns only with the help of Pronouns.

What are different kinds of Pronouns?

There are eight kinds of Pronouns. These are as follows:

Number: There are two numbers used in Personal Pronouns. These are as follows-

Person: There are three persons used  in Personal Pronouns. These are as follows-

Case– There are three cases used in Personal Pronouns. These are as follows-

Below is the image of Personal Pronoun chart:-

Eg-  I trust myself.
They did their work themselves.

Eg- He himself inform you.
She herself suggested him.
Points to remember:- Reflexive Pronouns and Emphatic Pronouns both are the parts of Compound Personal Pronouns.
In these both kinds of pronouns ‘self’ or ‘selves’ added depend upon number.

What is Indefinite Pronouns. (Read more) 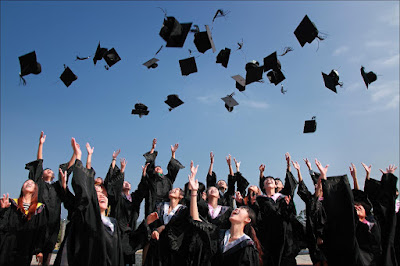 In the above image, you can see many students so it is showing plural number. As it is in plural number and near as well so you will use ‘Those’ here.

Those students are enjoying after being graduate.

Indefinite Pronouns:- It refers to persons or things in general. It does not point any person or thing in particular.

Eg- some, many, all,one, anyone etc.
Some are intelligent.
Many students attend the session.

Distributive Pronouns:- It refers to one person or thing at a time. It is always singular and take a singular verb.

Eg- Each, either, neither etc.
Each boy will win a reward.
Neither of these pens is his.

Eg- Whose, which, whom etc.
Who is smarter than you?
Which is your site?

Here are 20 examples of pronouns in different sentences:

I hope this article is useful to learn about Pronouns and its kinds.