Noun and its types:-

Hello learners! In this article, you will learn about Noun and its types.

There are nine parts of speech. These are as follows- 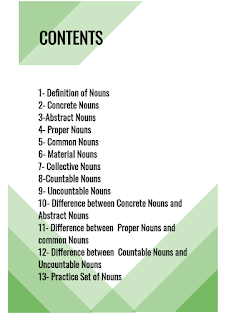 What is Noun for kids?

Noun is a naming word.
Eg– Children, kite, playground etc.
The above three examples are naming words hence, they are Nouns.

Here is a list of some naming words those are divided into categories of person, place, animal and things. 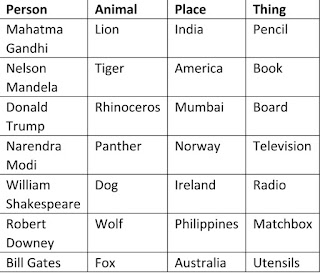 Ques– Identify nouns in the following sentences:-
There are ten sentences mentioned above to identify Nouns in each sentence.

How many parts of Noun

Noun has its two parts.

What is Concrete Noun

Concrete Nouns are the nouns which we can see or touch. You can use your five senses: ‘sight, hearing, taste, touch and smell’ to know about Concrete Nouns.
Eg- Students, flowers, pens etc.

What is Abstract Noun?

Abstract Nouns can not be seen or touched. It can only be felt.
In other words, the Nouns which we can not see or touch is known as Abstract Noun.
Eg- Truth, honesty, sacrifice etc.
List of Abstract Nouns

What are the differences between Concrete Nouns and Abstract Nouns

How many types of Nouns. ( NOUN AND IT’S TYPES)

Explanation of different types of Nouns.

Eg- Jismy, India, Amazon etc.
Let’s understand proper noun with two examples in complete sentences.
1- Jismy lives in India.
2- Amazon is one of my favourite online shopping sites.
Note– In the above two sentences, underlined words are in proper nouns as they are particular names and begins with capital letters.

● Common Nouns- Common Nouns denote name of same class. Unlike Proper Nouns, it is not capitalised unless it begins a sentence.

Eg- Parents, teachers, students etc.
Let’s understand common noun with two examples in complete sentences.
1-Our parents teach us good lessons.
2- Teachers are builders of the nation.
Note– In the above two sentences, underlined words are in common nouns as they use to denote words of same class.

What are the differences between Proper Nouns and Common Nouns

● Material Nouns– Material Nouns show name of any matter. It refers to matter or substance through which things are made or build.

What is Countable Nouns

What is Uncountable Nouns