Let’s begin today’s session about ‘Formal writing’. But before starting this session, you must know about letter.

What is a letter writing

Letter writing is medium or source through which we convey our message to others, generally via posts.

How many types of letter writing

Formal letter: When one writes a letter for professional purpose or in easy words, when we write a letter to someone whom we do not know personally, it is called formal letter.

Informal letter: When one writes a letter for their personal purpose or in easy words, when we write a letter to whom we know personally, it is called an informal letter.

Write a letter to your principal for fee concession. (Read full article)

Here is the format of Formal letter.

Use and importance of format of formal letter

Format of a letter writing is very important. When you generally send a formal letter to someone, the recipient of the letter will go through letter’s format first as it gives first impression for the response of your letter writing. Since a letter is a formal code of communication so, you need know how to write a letter with it’s correct format.

What is the format of a formal letter

Format of a formal letter

1- Sender’s address:  When you start writing a formal letter, the very first point is to write the address of the sender. It should be a complete address.

2- Date: After writing sender’s address, the next point in format of Formal writing is to mention date. You must write the same date, when you are writing a letter.

3- Receiver’s address: After mentioning date, you write address of the receiver. It should be a complete address.

4- Subject: Formal letter takes subject in it’s format. It is the fourth point, comes in the format of Formal letter. It should be brief.

5- Salutation: It is a greeting. Usually, in formal letter writing, you should use a word ‘Dear’.

(I) Introduction– It gives introduction about the letter. It opens body paragraph.
(II) Main body– Main body part consists of the whole message about letter.
(III) Conclusion– It summaries the whole paragraph. It closes body part of letter writing.

7- Subscription- It is the act of signing one’s name. The most popular subscription in formal letter is ‘yours faithfully‘.

8- Signature: It is the last point in format of Formal letter writing.Sender may write his name or only can do his signature.

Now, let’s understand this format with the help of the following example.

Write a letter to your principal for fee concession.

MIG- 39/40,
Railvihar,
Gorakhpur- 273013.
4th August 2020.
Little Rose Academy,
Medical Road,
Gorakhpur- 273013.
Subject- A letter for fee concession.
Dear Sir,
I am Sneha Sharma, studying in your institution in class 11th A.
My father is a blacksmith. We are four sisters and one brother. As we are from a poor family so, my father is not able to pay my full fee. I am a bright student. I want to continue my study.
Kindly give me concession in fee. I shall be highly obliged.
Thanking you,
Yours faithfully,
Sneha
I hope format of Formal letter is cleared now with the above example. But, there are some points that must be followed while writing a formal letter.
These are some points to remember.

1- Sender’s address and receiver’s address must end with a postal code.
2- Follow the correct format of date. (As it is shown in the example of letter.)
3- Don’t forget to write ‘subject’ in a formal letter.
4- Salutation usually takes ‘Dear’ with itself.
5- Do not forget to show your gratitude after writing body part of the letter.
6- Subscription ‘Yours’ must be in possessive pronoun.
7- Put comma until you have not written a complete address and after writing pin code, put full stop.
8- Be careful regarding punctuation marks.
9- Start writing letter from the left margin of the page.
10- Leave a line after writing sender’s address, receiver’s address, date and subject.
So, you have learnt about formal letter, it’s format along with an example.
Now here are some questions, rapidly ask by various people. 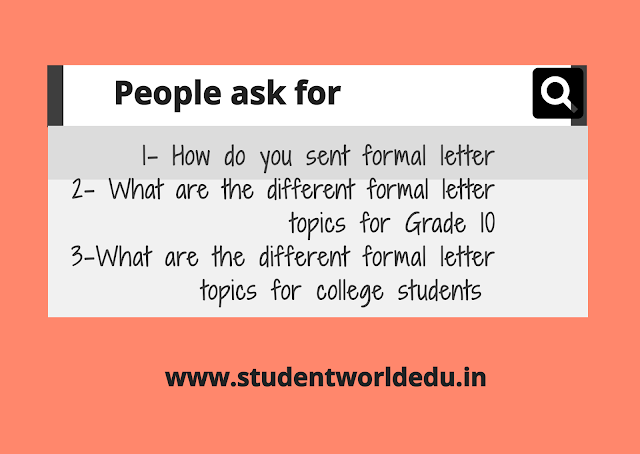 ■ How do you sent Formal letter

The present generation is totally depend on technology. People generally sent formal letter via email or sometimes they use to send formal letter via posts, especially when a letter is send to government, sender sends it via posts.

■ What are the different formal letter topics for Grade 10

These are some topics to write a formal letter for Grade 10 students.
1- Letter to the editor of the newspaper.
2- Complaint letter ( reporting for a lost wallet etc or complaint against someone)
3- Ordering letter ( ordering for the book, equipment, etc.)

■ What are the different formal letter topics for college students